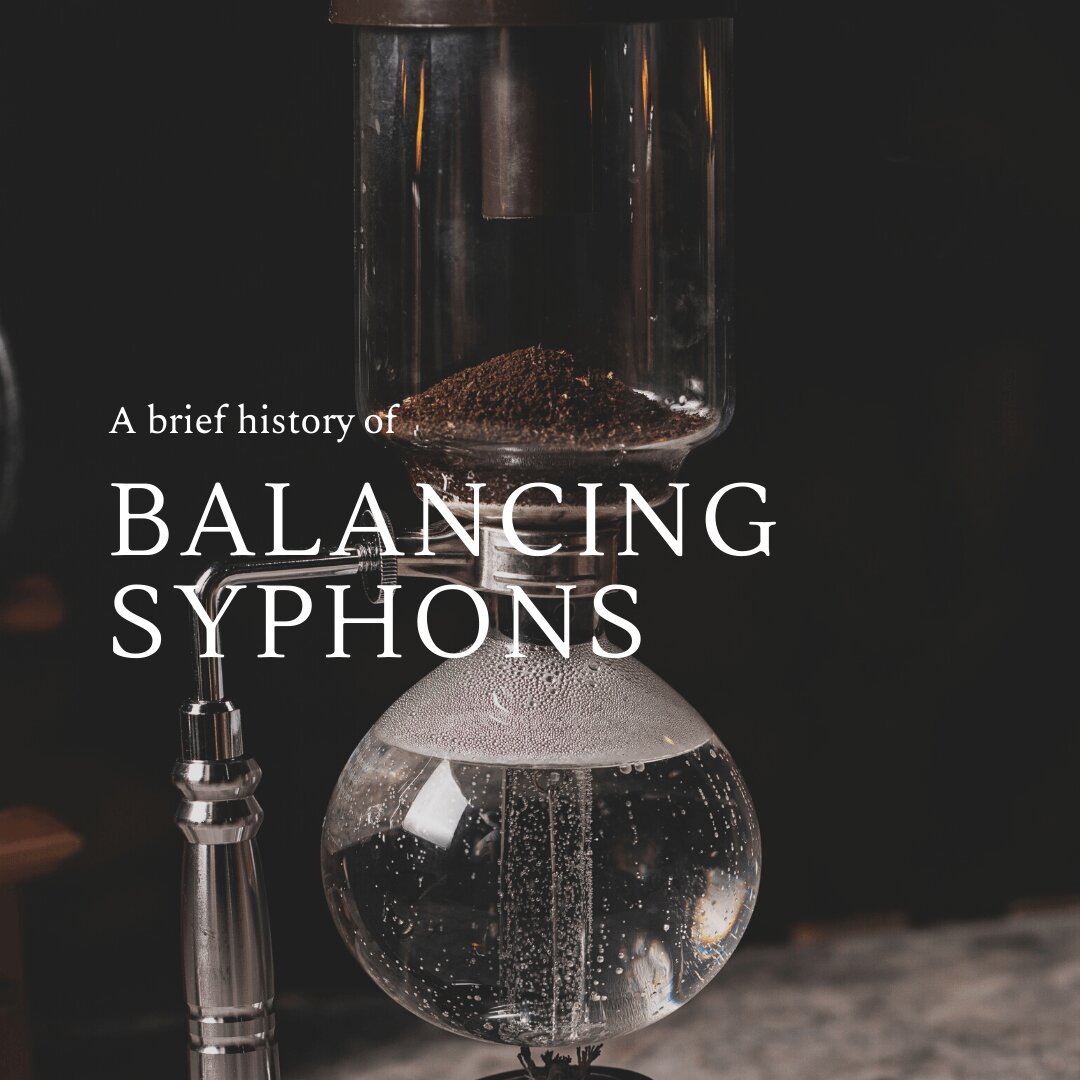 A brief history of balancing syphons
By Sep 9 2021
FacebookTwitterPinterestLinkedin

Coffee drinking became prominent across Europe in the early 1840s, inspiring coffee brewers to find ways to avoid boiling the coffee, which degrades its overall quality. These brewers experimented with different methods, resulting in syphon brewing.

Balancing syphons evolved from a rich history of syphon brewing, with inventors including Napier, Bastien, Gabet, and Preterre each contributing their own enhancements. 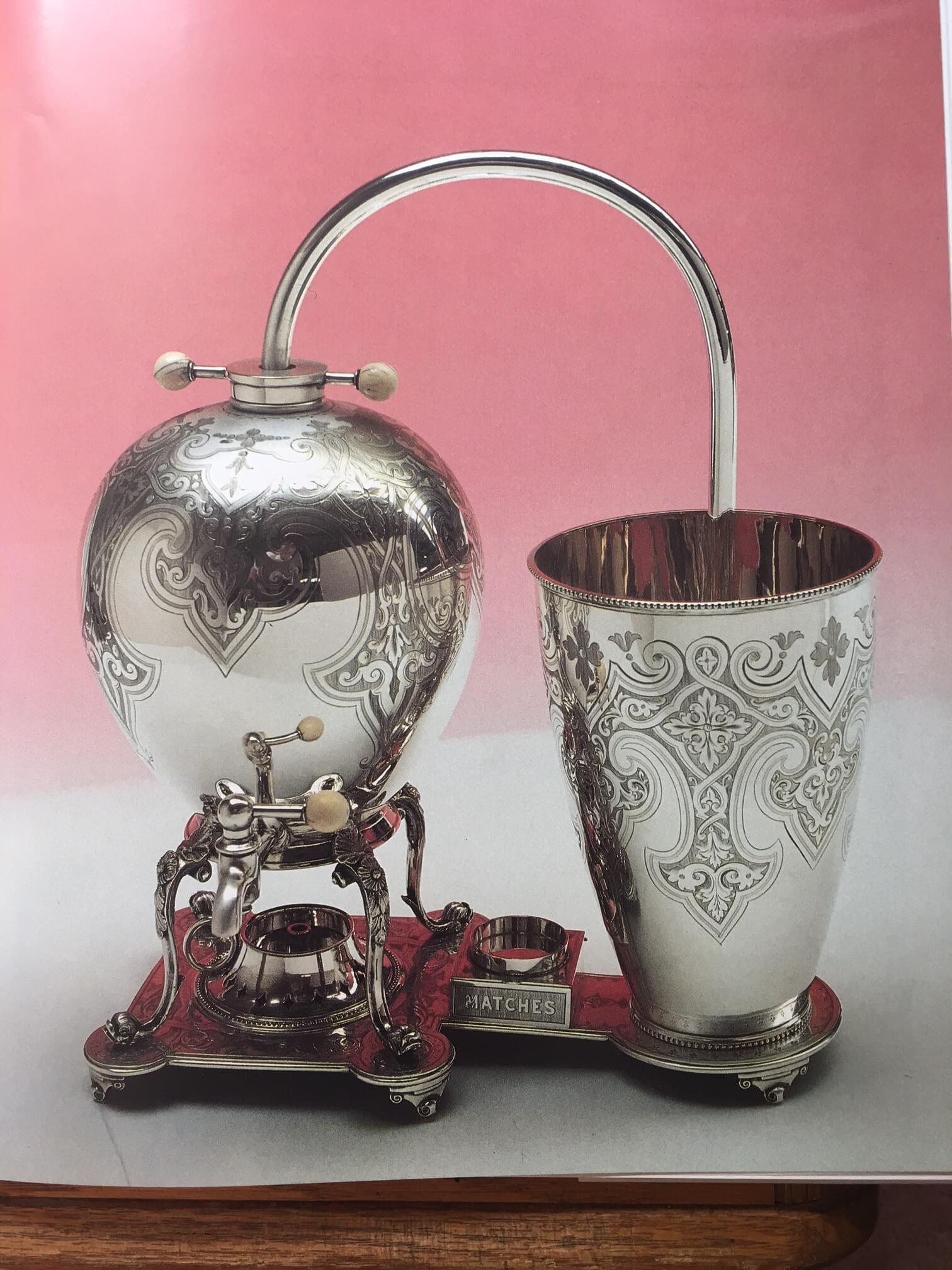 The French double glass machine, known as the Napier brewer, was created by Scottish naval engineer and inventor James Napier in the 1840s. These machines placed two thin-blown glass flasks one above the other, using vapour pressure and gravity to produce coffee.

This version was popular in England, where stunning silver-plated versions of the Napierian brewer were produced until the early twentieth century.

In 1842, the Bastien patent introduced a new design: he placed the two flasks side by side instead of one above the other. In this model, the boiling water is pushed through a filter box holding the coffee in the second flask which is fitted with a tap. The two flasks are held together by a single crosspiece, which adds stability and aligns the heater and the serving tap at the same level. This model requires the flame from the heater to be manually extinguished.

This balancing syphon that artfully combined form and function quickly spread across high society in Europe.

In 1844, Louis Gabet patented his model in France. Gabet’s version included a weighted counterpoise, making it one of the most successful balancing syphon models. The counterpoise extinguished the heat from the spirit lamp, which made the process safe and automatic. This automatic process was a key innovation to the existing Bastien model.

For the Gabet model, the weight of the cold water in the right flask holds open the lid of the spirit lamp. When the water is heated and vapourised, passing through to the left flask, the counterpoise action flips the spirit lamp lid shut and extinguishes the flame automatically. Once the air in the left flask cools, the vacuum draws the coffee back into the right flask, ready to be poured out through the tap. The flasks were commonly made of ceramic. 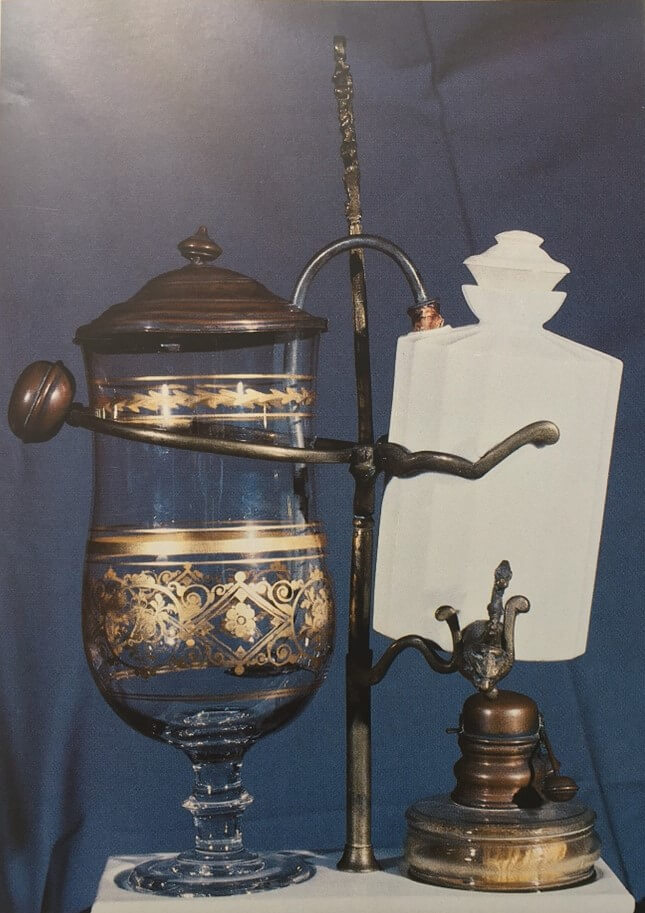 Some balancing syphons from this period featured beautifully gilded flasks, or porcelain jars decorated with floral patterns and animal designs.

Popularisation and adoption of the Gabet model 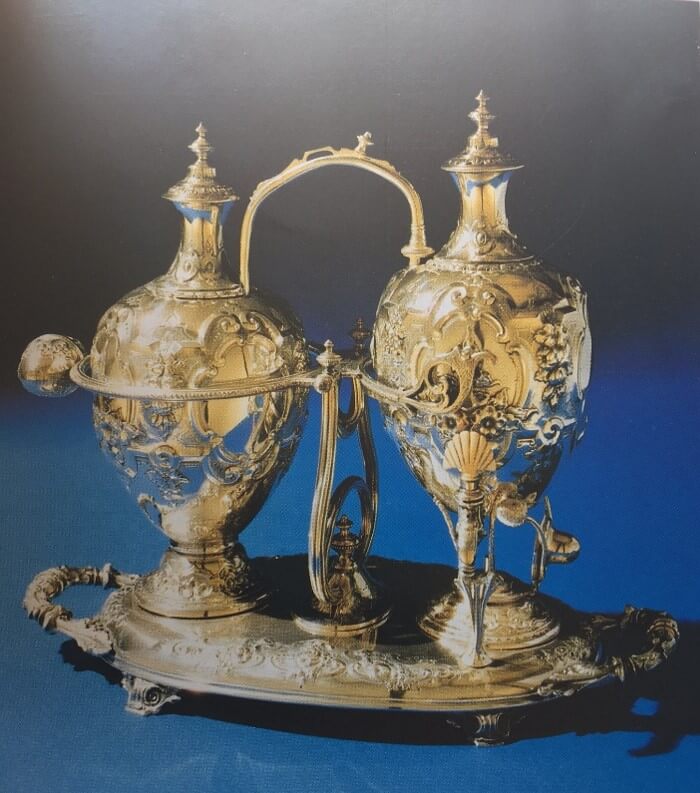 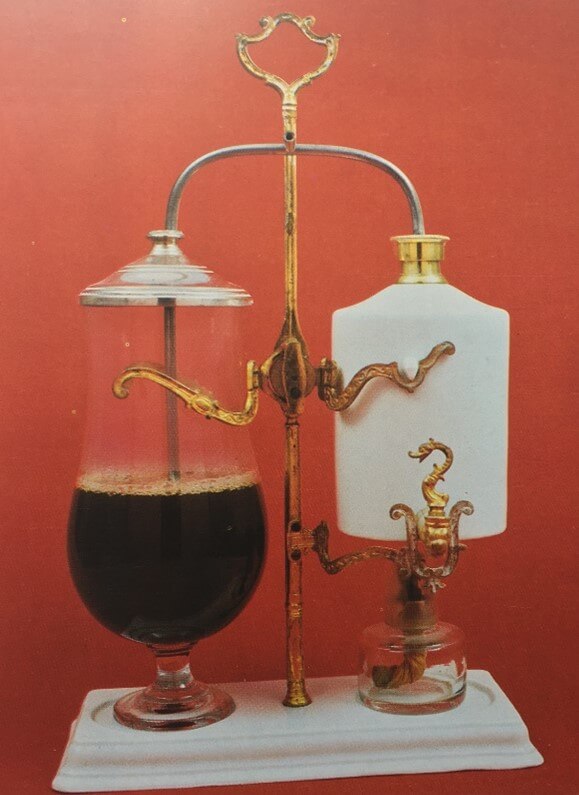 Soon after the Gabet model was released, doctors, mathematicians, pharmacists, cafe owners, as well as metalsmiths and glassmakers, added their own advances to the balancing syphons, making artistic and functional improvements to its design and materials. Balancing syphons merged efficiency with aesthetics, providing inventors with various avenues for creativity. The different parts involved provided opportunities to metalsmiths, goldsmiths, China painters, glassmakers, and glass gilders to collaborate. 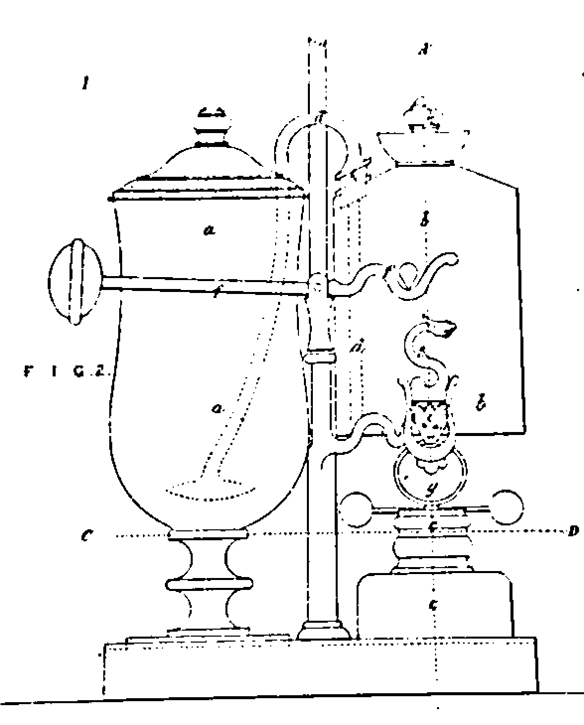 In 1849, Apokeoni Preterre of le Havre patented a balancing syphon for the English market, whose prospering middle class was acquiring a taste for fine coffee. He packaged this device together with coffee beans and roasting apparatus. This device resembled Gabet’s model, with a balancing syphon and counterpoise. 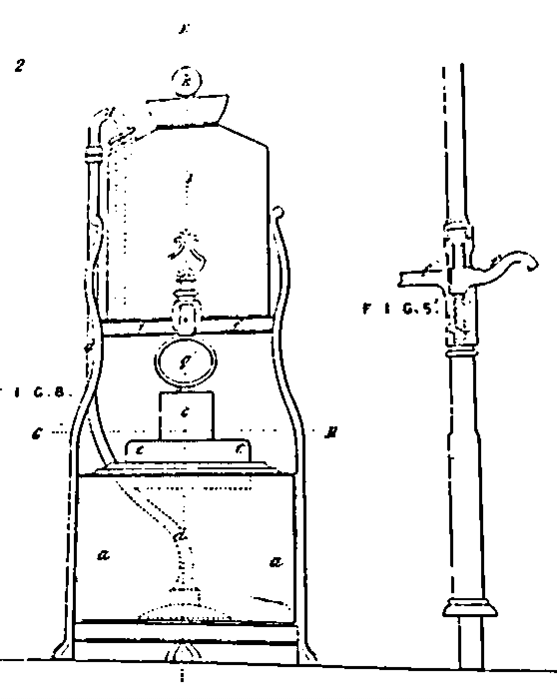 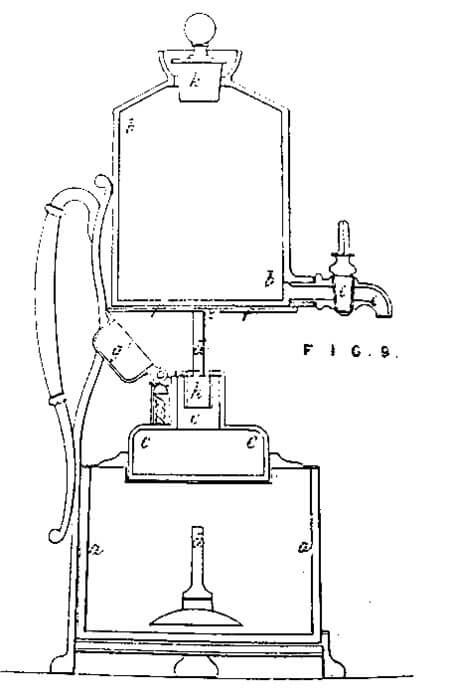 Preterre also created an alternative model that featured two tiers where the flasks are placed on top of one another with the heater lamp in between. The upper flask holds the lid open when it is filled with water. The cold water in the top flask is heated and pushed by steam pressure through the tube into the bottom flask to mix with the coffee. Then, the top flask rises on a spring. As the air inside cools, the coffee is drawn back into the top flask and can be poured out from the tap.

Around the same time as Preterre’s patent, Reiss of Vienna also launched a similar version that used the simple counterpoise but positioned the flasks side by side. As a result, balancing syphons are sometimes referred to as “Viennese syphon machines.”

Balancing syphons are prized for producing a clear and flawless brew and became cherished dining pieces in royal households across Europe.

In the late 1850s, Franz Josef, Emperor of Austria, King of Hungary, commissioned a Parisian goldsmith to supply him with lavishly embellished balancing syphons. Along with his beautiful young Empress Elisabeth, he hosted a royal banquet at “Schoenbrunn” - his summer palace. This residence became the hub of royal social life - all the courts of Europe were invited. At one of his banquets, the emperor famously dazzled his guests with a stunning balancing syphon machine that used gravity and pressure to brew coffee in a magnificent after-dinner ceremony.

With its beautifully crafted coffeemakers, Royal Paris honours the rich history of innovation that defines the balancing syphons. The Royal Paris coffee machine is a modern re-creation of the Gabet model, with fine materials and exemplary design that make a statement of extraordinary taste.

Failure to join the shopping cart !

Quantities can only be Numbers

Product has been added to the shopping bag

Product has been removed from shopping bag

Successfully added to your favourites!

Successfully removed from your favourites!

The reset password email has been sent, please check it！

Register Success Please Wait For The Admin To Review

By creating an account we will send you the latest product information in a timely manner.